A little intermezzo before the holiday – at least my holiday – ends, twenty-four songs from five albums by artists from four countries.

I know it is not completely PC to refer to Indians (probably not to cowboys either for that matter) any more, but I couldn’t resist the headline when the talented Buffy Sainte-Marie (who is a Cree, not an Indian; Ghandi is an Indian, in case you wondered) returns with a surprisingly good album in her 74th year, Power in the Blood. It is ironic that a 74-year old is the artist with the most power in her voice, in her arrangements, and not the least in her convictions, in my list right now. She has had ample time for practise; her first record came in 1963, 53 years ago, and she hasn’t lost the touch. Her vibrato voice could earlier drive me to madness, but as with good old Ringo, the older they get, the better they sound. 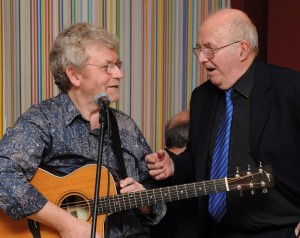 A slightly younger man, Pete Atkin, used to be paired up with one of my TV presenter favourites, Clive James, but Clive is sadly ridden with leukaemia, and doesn’t record any more. Most of the songs on the album, The Colours of the Night,  are small recitations, in which the lyrics are at the forefront at the expense of the music, but I have picked three gems that moved me and that work well when you are paying attention. You should.

I was never particularly fond of Aztec Camera when they were around. I couldn’t nail why the band never turned me on, perhaps the music was too bland for me, I don’t know. However, I do like Scottish singer Roddy Frame’s album , Seven Dials, at least most of the songs. Here are clear references to 70s and 80s albums by Al Stewart and Billy Joel, and the production could have been done as many years ago – and that is a compliment.

Sharon Robinson has been Leonard Cohen’s backing singer, arranger and collaborator for decades, and co-wrote some of his songs, like Everybody Knows. She has just released her second album, and some of the tracks on Caffeine are just exquisite (of course you’ll find all of them in the list), so when you have played Cohen’s songs to death, put Sharon on instead. You blood pressure will stay down.

Then, finally, on to the cowboys. Yes, I know there is a lot of country in my list now, but you won’t mind The Deslondes, I promise, because this New Orleans band, doesn’t apologise for their old-time country style and they do it so damn well. There are songs on the The Deslondes album that push the limits of what I can take – I am after all only an immigrant country fan; I wasn’t born into it – but I have picked four great honky tonky howdydoody Midwestern songs, taking me back to my alma mater in Ohio and happy times.

The list is thus shortened; Darren Hayman, Ryan Bingham, Yo Zushi, Zaz, Grace Griffith, Maggie Björklund and Amira Medunjanin have served us really well and hopefully broadened our musical perspectives. Continue listening to them. I will.

I have given up on Apple Music for the time being. Many albums are just not there, and the manual way I have to update the list is driving me up the wall. As soon as Apple has got its act together, I promise I will make another attempt to give you my list there as well.